With the last FBHVC survey having taken place in 2011, the historic vehicle movement was in need of a fresh review of its size, scope and health.

On the positive side, the survey revealed the hobby was more popular and more prosperous than ever. The value of the UK industry was estimated at £5.5 billion, a significant increase on the £4.0 billion figure from 2011. So too, an estimated 8.2 million Britons are interested in historic vehicles, well over 10% of the population. 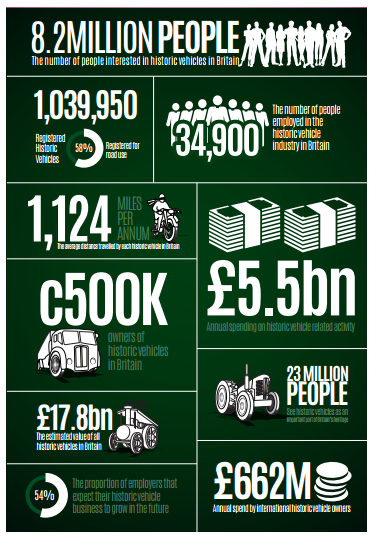 However, the survey also revealed many anxieties within the hobby and the industries that surround it. 6 out of 10 people working in the industry are worried about future regulation. Furthermore, many clubs report minimal success attracting younger members. Indeed some find that while their memberships may be stable or even growing, their average age is also increasing at approximately 1 year to every calendar year.